A young woman approach me to seek for advise on how to help her as she is consistently disturbed by regular nightmares. She being a non catholic ask me if a dream catcher can help her? I then consulted  an exorcist priest who advise me to discourage her from using dream catcher.

On further investigation I discovered her nightmares will link to her ex-boyfriend who brought dolls with dead fetus spirits into her bed room. She told her ex-boyfriend to remove the dolls after they broke up the relationship.

I know that salt is used in catholic church- salt is added into holy water. So  I gave her salt in bottles and placed it into her bedroom. She came back to tell me that the nightmares still continue to tortures her.
I then bought a large white candle and chanted the name of Jesus over the candle. Gave it to her and instructed her to light the candle and place it in her room when she was about to sleep. The next day she came to me so excited telling that she had no nightmares. Aggressive Spirit waiting for the challenge


A lady called me on the phone requesting my help to get a priest to bless her home. Her son had gone to take shower. When he returned to the room to get changed, he saw an image of an elderly lady sitting on the bed. At the next second, she disappeared. Son ran to his mom to inform her.

I contacted a priest who was willing to bless her house. I arranged also for a communion minister, who has the gift of the third eye, to come along. He then sensed that the spirit was an aggressive spirit, and was waiting for the priest and myself to go to the house. The spirit would not attack the priest and me but was planning to go after my children. I spoke to the priest who advised the lady to seek an exorcist priest.
at September 12, 2018 No comments:

There is a certain special school in Singapore that has the spiritual disturbances. In one of the classroom, an ex-teacher placed a medal of St Benedict on the wall. Over the years the spirits could not enter this classroom.

One year, a teacher with the third eye entered the classroom and noticed that her student kept looking outside the classroom.She saw the ghostly figured trying to beckon the boy to come out. The teacher mentioned to her co-teachers and they assume that the medal is the cause of it. They asked their pastor to remove the St Benedict medal. After the pastor did that all hell broke loose. Their files were flung on the floor of the classroom. More disturbance s continued for a long time. 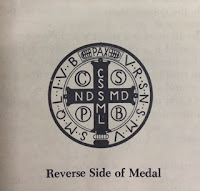 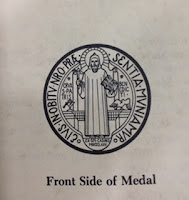 Those keen to purchase a rosary with St Benedict medal  may check out the following website:
www.rosarysingapore.com
Catholic Collectables Singapore Online gift shop

Deliverance prayers can be said by lay people -privately said

I am grateful to a good friend who got this book for me.
It contains prayers to break curses and spells.
Prayer to break unholy ties.
Prayers for protection before deliverance and prayer for inner healing.


Father Salvador Carrillo, a Scripture scholar comments- "Satan's greatest victory is that he has got us to believe that he doesn't  exist, thus permitting him to act with complete freedom.

Oppression
Oppression is the effect of Satan on bodies and things, for example, noises in the night, things that move about themselves, lights that go on and off, voices, some illnesses that are medically in explicable.

There was a man named Julio Nunez who was unable to walk and had to go around on all fours.  The Lord healed him at a prayer meeting. About a year later, the parish priest of San Francisco de Macoris asked us to give a charismatic retreat. I invited Julio to come to the retreat to give his testimony.
When I arrived and asked for Julio, a lady sadly told me: "Father, that thing came back to Julio. Yes, Father, he can't walk anymore and is back to crawling again."
"How long has he been like this?"
"It started again five days ago."  I asked her to go and find him, and he was brought to see me on a horse. We began to pray for his healing. I said to the Lord: "Lord , you can't show up badly here, this is Julio's parish,"but the Lord didn't heal him. So we began to pray in tongues, suddenly the word's "spirit of illness"came to my mind. So I commanded:"Spirit of illness, in the name of Jesus I order you to come out and let this child of God be free. In the name of Jesus I order you to throw yourself at the feet of Jesus, so that he may dispose of you as he sees fit, and I forbid you to return and bother him, for he is a child of God and you own no part of him."

Julio started shivering, and then, very simply, he got up and started to walk.

Obsession is the influence and the action of the enemy over people's minds. There are people who are tormented by a tremendous sexual obsession or the idea of suicide; by a spirit of blasphemy or self destruction or contempt: by the feeling that they are not worthy of God's  forgiveness. It could be said that an obsession is like a temptation, except that instead of being temporary it is permanent, and has a power and an intensity that seem to make it impossible to overcome.

Possession occurs when a person has made a conscious act of giving his will to Satan, selling his/her soul, signing satanic pacts with blood or belonging to a satanic sect. It can also occur in people whose parents have consecrated them to the devil with or without their consent.

spritual guidance
Hi, I am Jude Miranda. Ex Seminarian with a religious order & lived with a hermit in Australia when I was considering becoming one. Now married with 3 kids. My 3 children are named after the Archangels- Raphael, Michael & Gabriel. Great kids. My experience with the supernatural started when I was young. If I missed prayer for one week, I would experienced dreams of evil spirits entering my inner zone. In the seminary, I have seen visions of demons. I realize I am sensitive to the supernatural world because my paternal grandmother who could see & hear the unseen world. Now, my son has the third eye. I am dedicating this blog page as a hope to prepare him. As a father, I am looking into the teachings of the catholic church in the area of sacramental,scriptures & teachings of demonology and deliverance as research to help bring awareness in the area of spiritual warfare.